Because of our belief in human rights and as an essential door to peace-building, we work on the Syrian Observer of Human Rights Program. We launched the Syrian Observer in Lebanon (SOL) because there are undocumented violations against the Syrian refugees, an estimated million and a half refugees. We have issued twelve (12) reports monitoring the state of human rights in the Lebanese Bekaa area where 400,000 of these refugees reside.

Jointly submitted on behalf of

The steering committee would like to express the gratitude and appreciation to all CSOs, NGOs and activists contributing: data, documents, reports and efforts. Especial thanks for those valiant men and women, who risked their life in the fields to secure the data for documentation, and we couldn’t mention their name for security reasons. 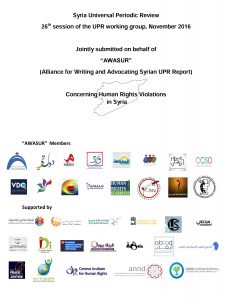